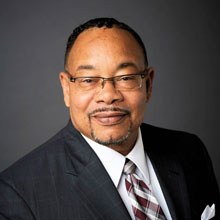 Ronald has had a long and accomplished career in law enforcement, beginning as a New York City Police Officer. Instead of becoming a police artist as he originally planned, he found himself “walking the beat” for 12 years and attended law school where he received his Juris Doctorate from New York Law School.

In addition to managing one of Staten Island’s only minority-owned law firms and serving as pro bono counsel to several Island houses of worship, Ronald is President of the Richmond County Black and Minority Chamber of Commerce.